Black Flies and a Flat Tire

July 20, 2017
It was actually a good gravel road, as gravel roads go.  When we booked the car, we made sure (several times) that they knew that we were going onto the Trans-Labrador highway and that we'd be on the gravel part -- 'off-road' or 'dirt road' wasn't permitted.  No problem.  Then we bought all the insurance possible.  In L'anse au Clair we borrowed the satellite phone (for emergencies only) because there is no cell service on the road to Mary's Harbour (not that ours worked anyway, but someone else's might have). But, sadly, the Ford Fusion wasn't up to the challenge.

We must have done something right in our lives because just as we pulled in to Mary's Harbour, the car started to beep indicating low tire pressure and when we stopped in front of the motel the left rear tire was well and truly flat.  At least it didn't happen in the middle of nowhere, though there were actually quite a few road crews working in various places on the road getting it ready for paving by this fall. We now had at least a roof over our heads and a land line.  Meanwhile the black flies had a feast.
Thereafter followed a flurry of phone calls beginning with Enterprise car rental who wanted nothing to do with us, claiming that they don't deal with any issues involving dirt roads.  Next was the CAA who were very helpful and said they'd call back.  In the mean time, Richard decided to change the tire himself putting on the spare tire while Judith remained in the motel room waiting for the call.  Judith was highly dubious of this plan.

After about a half-an-hour, since no call had yet come, J. stepped out to see how the tire change was progressing -- to find the spare tire successfully put on already and Richard chatting up Katharina, a young lady on a bicycle tour.  I will leave R. to write a paragraph telling his side of this remarkable stroke of luck.

Yes  well Richard here. I don't know if you have had the occasion to change a tire recently. There is no fifth tire only an ersatz replacement. The jack is hidden under the tire and it's a kind of chinese puzzle to undo it. I had got out the tire, put the jack on the ground and was fumbling with the functioning of the wrench when this young woman appeared out of no-where. She had actually cycled all the way from Baie Comeau and was that sort of generous and resourceful quebecois. Quickly she sized up the situation and offered help. She crawled under  the car to find the jack point. Then I started to undo the bolts and was having some trouble since I still had the jack handle bent into two perpendicular pieces. Katharina pointed out to me ever so gently that the longer the handle the better the leverage!  She seized the wrench and demonstrated how easy it was! I didn't let on I was supposed to be a physicist. After that, all went well---until we had to face actually driving on this tire--but that continues below! 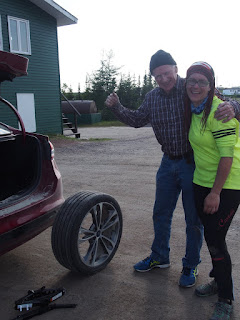 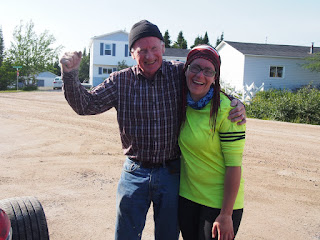 We were now faced with the prospect of how to get back.  If we tried all the way on the spare tire the same thing could happen again.  There wasn't even a gas station in Mary's Harbour.  Either we could try to travel 50 km farther up the road to Port Hope Simpson, or travel 200 km back the way we came and try to get to Forteau where there was a garage.  Hence the CAA calls which eventually led to them supposedly sending someone out to take a look and see if the original tire could be put back on with a quick fix.  Since we hadn't hit anything obvious we wondered whether there had been a loosening of the tire off of the rims from all the jostling.  The plan was to wait for CAA Trent who would arrive at 10:30 the next morning (Wed).  We thought that Trent was coming from Charlottetown (Labrador, not PEI) which wasn't too far.

Next morning 10:30 came and went without Trent.

Then 11:00 came and went -- still no Trent.  More phone calls, but anyone on the way couldn't have been contacted anyway.

Towards 11:30 with still no Trent, along came Cheryl and asked if we needed help.  By now we said yes.  Her husband had a 'shed' where he fixed stuff and she could take us over there.  We followed her for about 8 km on the spare tire and pulled up at the shed.  The rest was rather amazing.  There were Cheryl, her niece Nikita, the handy husband and his 16 year old son with a ton of equipment and snowmobiles in various stages of repair in the shed.  They set to work. Here's what it looked like. 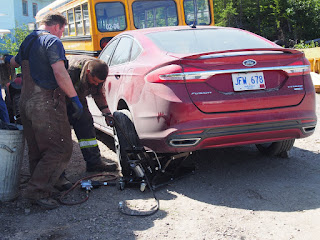 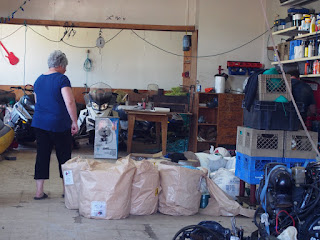 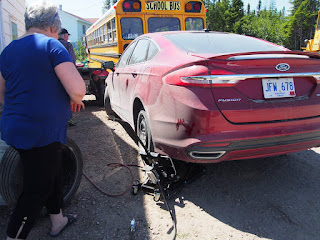 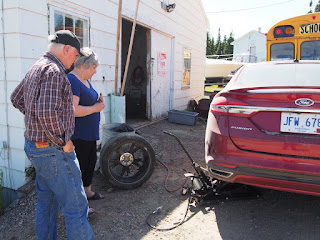 It turned out that there was a hole in the tire ('sometimes the gravel has pieces of metal in it').  These guys wedged in a plug ('easiest thing in the world to fix') and the spare tire was stowed again.  We tried to offer something but these people would not accept a thing.  We are incredibly impressed with all Newfoundlanders but these guys in Labrador were beyond amazing.  We slipped little Nikita a few bills and off we went, this time back the way we came.

About half-way down the gravel highway the beeping started again.  This time, we had little choice but to keep going, all the while watching the tire pressure indicator slowly showing that the same tire was becoming softer and softer.  The plug had, however, bought us time.

We never learned exactly what the numbers meant but we can say that 3 of the tires read '2.8' and the 3rd bad tire was showing 1.5, 1.4, 1.3 ...... you get the picture. Our regular conversation in the car was, shall we say, somewhat muted now.   BUT we indeed made it to Forteau and can now tell you that it is possible to drive on a tire that says 0.3 !!

It turned out that Trent was *actually* coming from Coastal Motors in Forteau but they didn't seem to mind the fact that we left since they could charge CAA anyway.  Coastal motors charged us $23.00 for an hour's work to fix the tire. 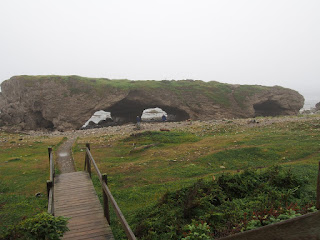 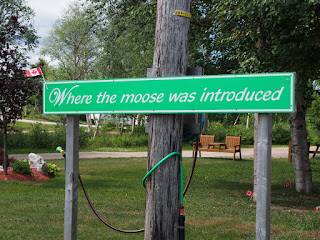